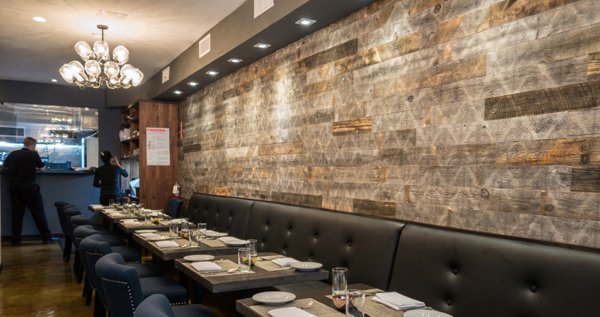 New York City is affectionately referred to as a melting pot, known for its ability to transport you to anywhere you can imagine if you just know where to look. Located in the Upper East Side, Imli is the newest addition to the variety of classic yet progressive offerings in Manhattan. A new urban Indian restaurant, Imli is owned by Mervyn Winston, Ram Reddy, and Albin Vincent, who seek to offer a different Indian culinary experience with unique preparations of dishes—some rarely seen on an Indian menu—and shareable small plates like those found at the bustling all-day cafés of Mumbai.

The food menu was crafted by Executive Chef Manuel Butler, a veteran Indian chef who consulted for the opening of Sahib, the recent recipient of a two-star New York Times review. At Imli, he created a menu offering a range of experiences anchored by colonial Indian cuisine, with influences straddling modern and traditional representing various regions of India.

Some of the starters offered include Argentinian Shrimp with turmeric, mustard seeds, ‪curry leaves and green apple; and non-traditional options such as Kerala Beef, which includes fork-tender chunks of beef marinated with yogurt, onions, black pepper, cardamom and ‪curry leaves. The restaurant also features vegetarian options like crispy okra topped with toasted fennel and herbs. 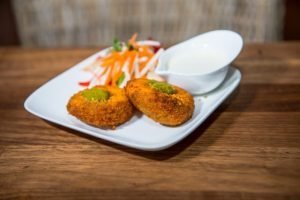 Each meal at Imli begins with an amuse bouche to stimulate the palate. Guests may then choose from an extensive menu of small plates, best paired with a flight of signature house made dipping sauces—divided into mild, medium or hot categories—from the list of 20 selections including pear-apple, peanut chutney with mustard seeds, and spicy tomato.

Entrées are divided into meat, seafood and vegetarian sections, with unique specialties like the Imli Burger, which features a blend of beef, garlic, cumin, coriander and chilies, served with masala-spiced fries. Other offerings include Chicken Rezala and pan-seared duck, served with garam masala-spiced cauliflower and potato mash. For vegetarian entrées, consider the Brussels Sprouts Medley, with turmeric, tomato and garam masala curry. Another popular menu item is the Vegetarian Tandoori Platter with mixed vegetables, pineapple and paneer cheese. Side dishes include a variety of flavor inspired rices, to mixed vegetable and paneer pulao. Guests can also enjoy mushroom and truffle naan, and parathas.

Brunch is a specialty at Imli, inspired by the Parsi population, who fled from Iran in the 8th and 10th centuries to established successful communities in India and developed a distinct type of cuisine. The Karachi Bun is akin to an Indian breakfast sandwich, with melt-in-your-mouth minced beef ‪kabab, a fried egg and red onion on a toasted brioche bun; and the Indian Shakshuka, features baked tomatoes, spinach, paneer cheese and peppers topped with two runny or boiled eggs, served with toasted pau buns. Refreshing brunch beverages include Watermelon Mimosas, Passionfruit Mojitos, or non-alcoholic “Neembu,” (Indian lemonade) offered at dinner in addition to a full bar menu.

A refreshing addition to NYC’s Upper East Side, the large u-shaped space is uber chic, with black concrete tables (hand made by one of the owners), a lacquered, rust-colored floor, silver studded cerulean fabric chairs, and wood walls adorned with a light, elegant pattern. Past the open kitchen in the back lies an enclosed, sky lit outdoor patio, perfect for groups and private events to enjoy views of the outdoors in any weather. With its inspiring menu, excellent service, and inviting atmosphere, there is a bright future for this restaurant that transports you, if only temporary, to the east.